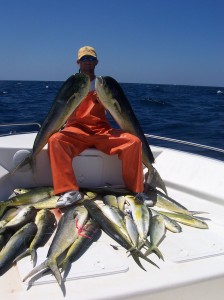 Offshore fishing is without a doubt the most exciting and heart pounding style of fishing there is. One minute your sitting, waiting, hoping for a bite and the next everyone in the boat scrambling around, pointing and yelling all wondering what’s on the line. Is it a tuna, wahoo, dolphin or maybe even a billfish? Big game fishing is often described as hours of boredom followed by moments of sheer terror. One thing is for certain, when the offshore bug bites you there is no other thrill like it.

The first thing to consider before going to the gulf stream is your equipment. Typically we use 50 lb class conventional reels for big game such as blue marlin, 30 lb class conventional reels for most lite trolling, and 20 lb class spinning reels for pitching baits to fish. If you want to fish deep you can also deploy a planner to dive down 20-30 feet in search of deep running dolphin or wahoo. For live bait fishing you may use a kite set up, in which case you will need a specialized fishing kite and kite rod. There is a whole host of terminal tackle that varies from lures to bait rigging gear. Finally, some must have accessories would include: binoculars, gloves, gaff, and a good fighting belt.

One of the best things about offshore fishing is that you never know what your going to catch. Typically, you can target specific species by season, lure selection, or fishing tactic, but with any strike you really don’t know what’s going to be on the end of the line. The primary species that you can expect to catch offshore would be dolphin, tuna, wahoo, blue marlin, white marlin, sailfish, swordfish and cobia. These fish all have one thing in common; they are all highly migratory pelagic species which means that they are all found in the ocean and travel from one place to another at regular time intervals of the year often over long distances. In the Hilton Head area: December through March target Blackfin tuna and wahoo, April though June target dolphin, May through July target dolphin, blue and white marlin, and September through November target sailfish.

Lets further examine the offshore waters off of South Carolina. The biggest limiting factor for most people going to the gulf stream in this area is the distance. The edge of the continental shelf (referred to as the edge) is located 65 miles off the beach of Hilton Head. This a long run to and from for a few hours of fishing, but this is also part of the reason that the offshore fishing is so good here. Because of the long run we generally watch the weather closely before any offshore trip, a good place to find real time weather data is at www.ndbc.noaa.gov. The edge is very important, and a good place to start fishing because the natural drop from shallow water to deep water concentrates bait which in turn brings in game fish. Sometimes the waters of the gulf stream also pushes onto the edge which really creates a great fishing opportunity. In any event, the gulf stream is the real reason that the fish concentrate off of our shores. The currents of the gulf stream come up from the south bringing warm water, food, cover and ultimately game fish.