Here in Hilton Head we have one of the healthiest shark populations that you will find anywhere in the world! As our waters warm up during the spring and summer months we get huge bait runs that draw in a host of large predator fish and sharks. Moreover, due to the high salinity of our inland waters we don’t need to go way out into the ocean to catch these apex predators! On many of our shark fishing trips we are dropping lines within minutes of the dock. You might ask “What are the size of the sharks that we typically catch on our shark charters?” Well that varies based on what sized sharks you want to target; but on an average trip we catch good numbers of three to four foot sharks and it is

not uncommon to catch larger sharks up to eight feet or more. I would recommend that you let me know what sized sharks that you want to go after before the trip. For example: if you are taking kids you probably don’t want to target the biggest sharks in the ocean because the kids may not be able to handle the tackle or the fight. On the other hand, if you want to do battle with the largest hardest fighting sharks we can always beef up the tackle, drop big baits and move to areas where larger sharks patrol. I always try to match my tackle to the size of shark that we are targeting to give you that fight of a lifetime! Another great thing about shark fishing is the fact that the kids just love to catch them…mostly because shark fishing is generally fast paced action – and of course, what kid doesn’t want to go back home and brag to all of their friends about the shark that they wrestled in on their summer vacation!!

Ask about our 2 and 3 hour summer Shark Specials!!! 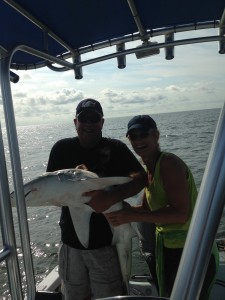 We have a vast number of shark species here in the Hilton Head Island area. These would include: bonnet head, black tip, fine tooth, hammer head, nurse shark, tiger shark and bull shark to name a few. Some of these species such as the bonnet head sharks are primarily caught around inshore waters while others such as the bull sharks are found mostly in the offshore waters. One thing is for sure; when the sharks move in there are a lot of them. I have had days where we were not looking to catch sharks, but there were so many that we could not get away from them! It really depends on what size sharks that we are targeting, but I generally try to match my tackle to the size of the sharks that I am after. For example; if we were on the inshore flats fishing for bonnet heads (they typically weigh 10-20 pounds) we would use light 8-17 pound class spinning rods. On the other hand, if we were looking to catch a 100 plus pound blacktip or bull shark I would move into a 15-30 pound class conventional outfit. And for anything larger than that…well a 50 pound class conventional is a must!

I know that a lot of people come to Hilton Head to enjoy the beach and with the movie Jaws and shark week playing on the tube most people see sharks as “deadly man eaters”, but in reality sharks are just a part of the chain of life in saltwater. In fact, sharks really don’t want to have anything to do with us and most shark attacks are accidental in nature. Here in Hilton Head Island, there are huge numbers of sharks during the summer, but you rarely hear of any shark-human encounters so please don’t get over excited about sharks in the water while you are out swimming. That being said, from a fishing standpoint, shark fishing can add up to some fast paced fishing action and a great day on the water!

One Question that I get asked occasionally on my shark fishing trips is: Do people keep the sharks to eat? The answer is Yes and No – Yes sharks are edible and certain sharks are legal to keep but No I do not keep any of the sharks on my charters. There are several reasons for this. First off the federal government has issued a warning that most species of shark should not be consumed due the fact that they are contaminated with high levels of mercury. Secondly, sharks are our apex predators and maintaining a healthy shark population is extremely important to our local saltwater ecosystem. Sharks feed on old, sick and overpopulated fish thus keeping our fisheries healthy and vibrant. So when it comes to shark fishing excursions I do my best to bring the sharks into the boat for a memorable photo and then they are released unharmed back to the wild.

The cool thing about catching sharks is the fight. They will flat ware you out! I have fought one shark for over 2 hours with stout tackle and when it came to the boat it was still full of spunk. If you are looking for a hard fight and some fast paced action shark fishing may be right up your alley.

I offer a special 3 hour shark fishing special during the summer plus 4, 6 and 8 hour trips. For more information about shark fishing or to Book a Guided Shark Fishing Trip shoot me an e-mail or give me a call. Captain Charlie