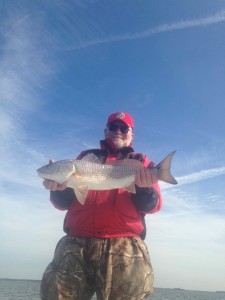 We are in prime redfish season right now here in Hilton Head! With the passing of a major cold front the waters have cooled considerably which has pushed the fish into nice schools around the area. Over my last few trips we got into several schools of big reds numbering in the several hundreds and with the crystal clear waters it has been like fishing in a giant aquarium…literally crystal clear water does to 6+ feet. Along with the larger reds we have also been catching quite a few “rat”reds (fish in the 12-15 inch class) which has been good to see because these smaller fish mixed in with the larger ones show me that we have many age classes with in our local population. Personally, I enjoy the shallow water fishing more than any other because it turns the sport of fishing into more a hunt. On an average trip we have been push poling in shallow water looking and looking because with the fish pushed together in such tight schools the last thing that we want to do is push right on by a bunch of fish because that could be the majority of fish on a particular flat. With the water clarity and fact that fish have been holding pretty shallow we haven’t missed too many schools and I would expect the remainder of the winter season to hold steady around the island. If you are looking for the ultimate inshore sight fishing experience on light tackle spin or fly give me a call and w will get after it! Catch em Up, Capt. Charlie