By this time of the year the water temperature has warmed up significantly and the fishing season is in full swing. June fishing can be summed up in two words, “mixed bag”. There is so much to catch this time of year and the days are so long you may never find yourself at home. 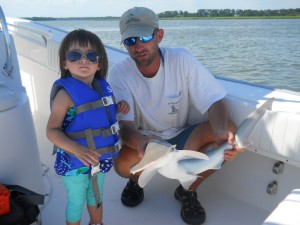 The shallow water flats and estuaries will be teaming with bonnethead sharks in water so low that you will often have the opportunity to sight fish many of them as they cruise the flats exposing their backs and tails in search of food. Most of these guys average 8-10 pounds and are great fun on light tackle putting on explosive runs and hard bullish head shakes.

Port Royal Sound hosts one of the best spawning grounds for cobia anywhere in the world and the month of June is prime time. Look to have shots at 30-60 plus pound cobia on an average day. Is fly fishing your thing? While fishing for cobia doesn’t be surprised to also catch spanish mackerel and blue fish. Late June can also be a great time to fish for monster sharks such as; duskies, lemons, bulls, black tips, and spinners. June also hosts some of the best conditions for tailing redfish; it is not uncommon to get shots at 10-15 fish a day. Is fly fishing your thing? Sight fishing redfish on the flats provides some of the best fly action of the year.

As cobia move in and out of the sound they also stage up on the offshore wrecks. In general, the wrecks will hold a larger concentration of big fish during this time of year. Along with cobia expect to catch sharks (some exceeding 200 plus pounds), mackerel and various bottom fish. Due to the fact that these wrecks are located in open water we generally look for light winds and calm seas to go offshore.