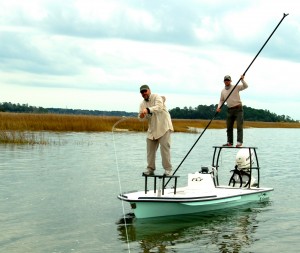 I recently read an article in the July/Aug/Sept issue of the International Angler (the International Game Fish Associations quarterly publication) about famed south Florida fishing guide Captain Steve Huff. Captain Huff is well know for guiding anglers to multiple tarpon and permit world fly fishing records including the 41 lb 8 oz permit record which still stands as the largest permit ever taken on fly. In the article they mentioned a knot that Captain Huff had developed earlier in his career for splicing in a line class tippet called the “Hufnagel” knot. Lets say for example that you wanted to set a 2 pound line class record on fly for say  a fish like tarpon, well you would surly want to make certain that your knots were as strong as possible to give you the best chance at landing the fish on such light line and here the Hufnagel knot would give you a real advantage. According to the IGFA a fly leader must have a line class tippet of at least 16 inches and a bite tippet of no more than 12 inches; so lets say that you want to set a light line class record…how do you tie knots that are strong enough to keep from breaking but also stay within the IGFA standards? Well this is where the Hufnagel knot comes in; basically he is tying bimini twist knots on either end of the line class tippet (at least 16 inches apart) and then attaching the double line strands to the main fly leader on one end and to the bite tippet on the other end. Because a bimini knot is virtually 100% true in breaking strength the 16 inch length of bite tippet remains true when tied properly. Moreover, I often use the Hufnagel knot as a safety measure when chasing large powerful fish such as spring cobia. One of the worst things that can happen while fly fishing is that the loose fly line on the boat deck can get entangled around an anglers feet, hands or fingers as a fish runs off after the initial hook up. If you are fishing with a 7 wt and light leader for redfish the line will easily pop and you are left with nothing but hurt feelings. On the other hand, if you were strapped into a 40 pound cobia using a 10 weight and heavy 50 plus pound leader getting tangled up with the loose fly line could be very dangerous. This is another good place to use a line class tippet. Lets take a look at cobia rigging for example: when cobia fishing I generally fish with a 9-10 foot leader and at the end I use a 50 pound bite tippet to keep the fish from mouthing through the leader during the fight and then above the bite tippet a 20 pound line class tippet for safety. Basically if someone does get entangled in the fly line it will break at the lower 20 pound mark. If you have the time I would highly recommend learning the Hufnagel knot and Until next time, Keep on Casting!