If you do enough fishing you are bound to tie into a really nice fish and I’m sure that we have all heard the stories about “the one that got away”. Believe it or not in most cases the one that got away really got the best of us due to either poorly maintained tackle or poor fish fighting techniques. Today were going to discuss how to maximize the use of spinning and conventional rods, drag control, fish fighting techniques and the use of belts and harnesses. 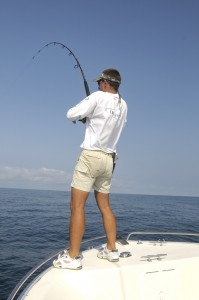 Next, let’s look at the drag systems and how to use them. A fishing drag is nothing more than a set of slick washers sandwiched between metal washers that allow the spool of the reel to turn in reverse which allows the fish to take line in a smooth controlled manner. The drag can be set to put more or less continuous pressure on the fish with out breaking the line. (drag demo) In my opinion most people set their drags way too tight, remember you can always tighten up your drag but in most cases a nice fish will break your line before you can loosen it. You need set your drag in accordance with the class of tackle that you are using and the type of fish that you are targeting. For example if you were fishing for sailfish (a fish that runs off very fast) you may use 20lb line with an initial drag setting of 3-4 pounds to allow the fish to take off on a blistering run with out breaking the line.  On the other hand if you were using the same rod for snapper (a fish that makes short hard runs into the bottom) you would start with a drag setting of 10-12 pounds to keep the fish from hanging you in bottom structure. In all cases good line and good knots are essential if you plan to maximize your tackle. (knot and line demo) To get a feel for setting your drag you may want to start by using a hand scale to measure the force needed to pull the line off of the reel, but as time goes on you will be able set your drags by pulling out line by hand. (drag setting demo using scale) (demo how to adjust spinning reel drag settings) (demo how to adjust conventional reel drag settings)  When using spinning reels note that you can always apply extra drag pressure to a fish by pressing your palm against the spool. (demo palming the spool) The other important thing to note about the use of spinning reels is that you need to be careful not to reel against the drag, this happens when you continue to turn the handle of the reel while a fish is taking out line. When you reel against the drag the line becomes twisted and near impossible to fish with. If you do end up with twisted line you can fix it by letting the twisted section drag behind a moving boat for a minuet. (demo reeling against the drag) Conventional reels actually have three pre-set drag settings. The first is free spool and is used to cast the bait, the second is the strike position and is used for the initial setting and run off of the fish and the third is full which will allow you to apply maximum pressure to the fish. Moreover, you can apply extra drag pressure to conventional reel by placing your thumb over the spool, but be careful not to do this while a fish is peeling off line or you are likely to get burned. (demo conventional reel drag setting positions) (demo thumbing the spool) Finally, drags need to operate smoothly. If you pull on the line and you feel rough spots in the drag (sticky drag) you need to clean and lubricate or replace the drag system. (demo how to remove, clean and lubricate the drag of spinning and conventional reels) 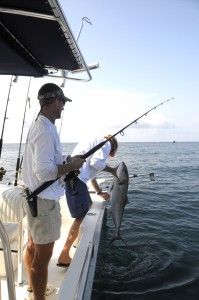 Now that we understand the equipment lets discuss the general techniques that we would use to fight a fish. Remember that you should apply these techniques to all fish regardless of size or fight, being a good angler requires split second movements and good control that can only be mastered by practice and experience. One of the biggest mistakes that I see anglers make when fighting a fish is to attempt to winch the fish in with the reel. The reel has two main functions: to let line out (with a smooth drag) and to collect the line onto the reel. True fish fighting power comes from the rod. When fighting a fish you should always keep a firm grip on the rods forward handle and keep the rod butt securely positioned in either your gut or under the armpit. Try to keep your feet positioned squarely under your body and if possible brace knees against the side of the boat. To bring a fish towards you pull up on the rod to lift the fish then drop the rod smoothly to collect the line (AKA the pump and reel). When using the pump and reel technique you want to use your legs and not your back, especially during a long fight.  Another common mistake that I see is for an angler to fight a fish off to the side, always face your fish. Keep your body squared up with the fish and if it runs from side to side simply follow it. Another big no-no in fish fighting is to allow slack in the line. Slack can be caused by many different things but the end result is quite often an empty hook. Finally, do not panic when a fish takes off on a run, this is why we set the drag. A big fish will run, you just need to be patient and wait for the fish to stop to collect line. (demo general fish fighting technique)

Let’s look at some advanced fish fighting techniques. First, what do you do with a fish that is close to the boat? There are many things that can go wrong here. For example, rods are easily broken, or the fish can tangle itself in the running gear. High sticking is a situation where the angler applies direct upward pressure on a fish that is under the boat resulting in the breaking of the rod. Any time that you are straight up and down on a fish you want to keep your rod at an angle close to level with the water. (demo high sticking) There are many techniques to keep a hot fish out of the running gear but in most cases you simply need to put the rod deep into the water and walk the fish away from any obstructions. (demo walking a fish) Another technique that we commonly use to subdue fish near the boat (other than a straight gaff) is to use the down and dirty. The down and dirty is simply keeping your rod tip down near the water and pulling the line directly away from the fish’s mouth and across its tail, almost as if you are trying to pull the fish backwards. If you can put the down and dirty on a fish you will surely break its spirit. (demo down and dirty) A few techniques that you may want to try with a large fish or during a long battle would be use an anchor ball, change direction, use current, short pump, pluck the line, or put the reel in free spool. Anytime that you are fishing for large fish from an anchored boat you need to attach a buoy to the end of the anchor line so that when you hook up you can simply throw the buoy over and chase the fish with the boat. During long battles you may want to try changing directions or the angle in which you are pulling on the fish to ware it down. Moving current can really help you fight a big fish. Try to make the fish swim and fight into the current this will ware it out quickly. Short pumping the rod is a great way to keep a fish coming towards you when the fish is near the boat or straight up and down. When you make long strokes with the rod and then reel down t collect the line the fish is able to turn its head away from you, but by using short pumps you can keep the fish coming in your direction. Finally, for fish that hug the bottom or get stuck in the bottom you may try plucking the line, the vibration will irritate the fish into moving. Other times when you have a fish stuck in the bottom you may try putting he reel in free spool (taking all pressure off of the fish) to see if it will swim out of the structure. (demo use of anchor ball, changing direction, use of current, short pumping, plucking the line and putting the reel in free spool).

In closing lets look at the use of belts and harnesses. Fighting belts and harnesses are used to give you a place to secure the butt of the rod and to take the pressure of fighting the fish off of your arms and back. The most important thing to keep in mind when using these items is that they need to be adjusted properly and in many cases they should be adjusted before the fish is on.