There are many ways to catch fish, but in almost all cases being able to use a spinning rod and cast accurately will greatly increase your chances of hooking up. Weather you’re blind casting around structure, pitching live bait, or placing bait on the nose of a tailing redfish, good casting skills are essential. Today we will be discussing issues such as casting for accuracy, distance and beating the wind. 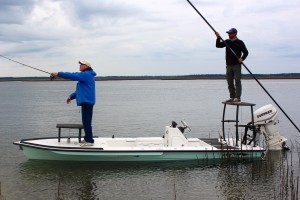 There are several situations where good casting skills will come in handy. Blind casting is a technique used when you want to cast around structure in hopes that an unseen fish is using that structure as cover to ambush pray. It is important that casts here are accurate not only to elicit a strike but also to keep from getting hung up in the structure. Another place that fish lay is under structure, for example under a dock or tree limb, so being able to cast under structure is important. Pitching live or natural bait is another important casting skill to learn. Live baits are soft compared to lures and require a soft “pitch” to keep the bait on the hook. Finally, sight casting to fish is the ultimate skill to be learned and mastered for any fisherman. Weather your casting to a tailing redfish or pitching a live bait to a cruising sailfish all bets are off as your heart races in the moment that you make that cast.

There are four different types of casts that we’re going to talk about today. If you can master all of these casts you will be well on your way to being a good fisherman. First, we have the standard snap cast. The snap cast will serve you well for most situations and should be learned first. Next we have the side arm cast for casting into wind, under structure, and to keep a low profile on the line. The high arc cast is another cast, used when casting for distance and casting around and over structure. All of these casts are similar; the only thing that you change is the plane in which you are making the cast. A good fisherman can cast over various planes and at various angles depending on the situation. Finally, we have the pitch which is used when presenting live or natural bait.

Let’s look at some spin casting basics. The basic components of a spin fishing combo are the rod, reel and line. Most rods are stamped with their specifications which allow you to match line and lures to your rod. The main components of a spinning reel are the reel body, handle, bail, spool and drag. When casting you first want to get into a good athletic stance and face your target. Hold the rod firmly around the rod seat or on the upper handle and place the line over your index finger. Next open the bail while keeping the line over your index finger. To make the cast, draw back on the rod then sweep forward with a sharp stop at the end of the cast in the direction of your target.

Casting accurately is one of the most important things to learn and keep up on. I’m going to give you a few techniques to improve your accuracy, but the best advice that I can give is to practice and fish often. First, focus on the target, in fact never take your eye off of the target when casting. Your body will naturally cast to the direction that you are looking. Next, if you do make a bad cast at a critical situation, for example; your bait is getting ready to donk a tailing fish in the back, simply cup the spool to stop the cast. Another technique that I use a lot is feathering the line, this is where you lightly cup the spool to slow the cast down when you over cast. Finally, there are a lot of situations where you will need to cast around corners or the wind will blow your line over into structure so learning to mend your line in the air will solve these problems.

Everybody wants to make longer casts, and longer casts are good. Remember however, that a short accurate cast will beat a long inaccurate cast in any situation. In general, if you can cast 40-60 feet accurately then you will be in good shape. A few things that you can do to increase your casting distance would include using a longer rod, heavier bait or a smaller diameter line. With the invention of braided lines such as power pro you can cast a small diameter line and still retain line strength. For really long casts you may need to cast a bit harder or simply position yourself for a down wind cast.

One of the biggest factors that you will have to deal with, especially in the salt water, is the wind. Even a moderate wind will affect your cast. In heavy wind your best bet is to try to make down wind casts. If casting down wind isn’t an option I have a few techniques to help you beat the wind. All of the techniques for distance will work for casting into the wind.  Another technique is to make a side arm cast, thus keeping the line low to the water and out of the wind. Finally, learning to compensate for a cross wind will really improve your cast. For example if you have a moderate wind blowing from left to right you will want to cast slightly left of the target to compensate for the wind. Mending the line in the air can also be helpful with a cross wind or even to keep the line away from a fish. When mending line in wind conditions you can use the wind to your advantage by allowing the wind to blow the belly of your line in a desired direction. Good luck and tight lines.