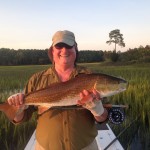 One of the most overlooked aspects of fly fishing is accuracy. For most of us we start out with the goal of just making a decent cast and then go head long into the quest for more distance; but in reality control and accuracy will put just as many fish on the end of the line as making a 90 foot cast. In fly casting there are a number of variances in style to include how we stand and how we hold the rod that can greatly effect accuracy. I would recommend that you work with the styles that you are most comfortable with but at the same time realize that different styles will give you advantages under different circumstances. Lets start with stance; if I were looking to make a long distance cast I would generally open up my feet allowing my left foot (I am a right handed caster) to be positioned forward of my shoulders and my right foot back, this would allow me to make the longest stroke of the rod on the forward and back cast. In contrast, if I were trying to make very accurate casts I would square my feet up directly under my shoulders or even allow my right foot to lead slightly to the target. This would allow me to sweep the fly rod directly overhead and down my line of sight towards the target thus giving me increased accuracy. Moreover, how you hold the rod can also be varied to increase accuracy. The best two grips for accuracy casts would be to hold the rod with either the thumb on top of the rod or the forefinger on top of the rod. The forefinger grip is slightly more accurate but in many cases more fatiguing. From a fishing stand point the advantages of being an accurate caster are obvious, but while practicing you not only want to work on casting to targets but also casting in front of and beyond your targets to mimic leading a fish. Look at your target as a moving fish…figure out what direction the fish is moving and try to place the fly two feet in front of and two feet beyond the target. If you get good accurately leading targets while practicing it will be like second nature while out fishing! This will be especially important as we approach the tailing redfish season…when these fish are up on the flats nosing down on fiddler crabs they are nearly oblivious to there surroundings which allows us to sneak in close for the perfect cast. In most cases, especially when wade fishing, we can get to within 20-30 feet of the fish before they spook off of the flat so under these circumstances a well controlled short cast will serve you very well. Until next time, Keep on Casting!