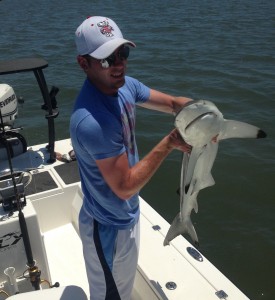 Here in Hilton Head, South Carolina we have one of the best shark fisheries that you will find anywhere on the Eastern US coast. With 17 different species of sharks moving into our waters during the summer months and an abundance of baitfish for them to feed on you can bet that we can find some great sharking action! The most attractive aspects about fishing for sharks is the fact that we generally catch quite a few on any given trip, they fight tremendously hard and then you have those rows of teeth. Some of the smaller sharks that we target would include bonnet heads and sharp nose sharks. These sharks average 10-15 pounds in size and are perfect for kids of all ages to catch on medium sized 12-15 pound class spinning tackle. In general while fishing for bonnet heads and sharp nose sharks we will get plenty of hook ups and they provide great drag screaming action with many fights lasting for 10 minuets or more. Next on the list would be the blacktips, spinners, lemons and fine tooth sharks. For these sharks I generally beef up my tackle a bit to 20 pound class spinning and/or 30 pound class light conventional gear as its not uncommon for these sharks to be pushing 100 pounds though many of them will be in the 30-60 pound range. Due to their size you had better be ready for a little longer fight…some lasting as long as an hour. Finally on the list we have some of our largest local sharks. These would include species such as bull sharks and tiger sharks. I have caught these sharks nearshore but in most cases they are targeted on the further offshore waters. The bull sharks can go upwards of 300-400 pounds and the tigers are gigantic 10 plus footers. These bruisers require much larger tackle in the 50-80 pound class range and the fights can last for hours but the rewards can be great in catching a large species shark. I find that fishing for these larger sharks is not really good for the kids and that even most adults don’t want to deal with a 2 hour tug of war with a giant shark on heavy tackle. But one of the nice things about shark fishing is that we can target the size shark that we are looking to catch by carefully choosing our location and bait. At the end of the day, shark fishing can make for a really nice day on the water with some excellent action and drag screaming fights…what more can we ask for? This summer lets hit the water to catch some sharks and until next time Catch em Up! Captain Charlie